Cater Food has invested in a portion cutter, which reduces the daily meat-cutting work of a number of butcher assistants. Supplied by Scanvaegt Systems, the machine is the first of its kind in Denmark.

Providing expert advice for all kinds of kitchens, Cater Food produces some of the country’s finest meat products in Denmark. The company, which has close ties to Dansk Cater A/S, has a meat cutting factory in Herrup and a cold cut factory on the island of Mors. In the 2,200-m2 premises in Herrup, more than 50 employees handle the importing and processing of meat and butcher products.

Two operators are working away at the new portion cutter, which is in the process of cutting pork loins. The cutting process is automatic and extremely accurate. Each cutlet must weigh 130 grams. One operator places the pork loins on the belt at one end. At a regular pace, the cutting machine then does its job, transporting the meat on the belt to the other operator at the end of the line. In a jiffy, the operator chucks the two end pieces over into a tub for pork mince. He also carries out spot checks by checkweighing the slices – here the weight display shows 130 grams. The cutlets, which are attractively assembled, are transferred to a plastic box, which is usually delivered to a canteen, restaurant or commercial kitchen in Denmark within the next 24 hours.

The next order is for beef fillet, which proceeds after the portion cutter has automatically cleaned the knife and belt. The customer is a restaurant that has ordered 53 serving-size entrecote steaks, each weighing 150 grams. The portioncutter does the counting and stops the moment the order is complete. Other tasks include cutting pork roast, liver, beef fillet and turkey breast.

Cater Food’s Technical Manager, Morten Bærentsen explains: “We’ve been using automatic meat cutting since 2004, but the new portion cutter is by far the best we’ve had. It cuts faster, better and more accurately and the meat is much easier to pack, because we no longer have to assemble the slices manually and lay them out properly. As a result, we save time and we have less give-away - that means we can earn more money”.

The portioncutter cuts faster, better and more accurately and the meat is much easier to pack, because we no longer have to assemble the slices manually. So, we save time and reduce give-away - that means we can earn more money.
Morten Bærentsen Technical Manager, Cater Food

Morten Bærentsen estimates that the portion cutter manages the work of around five butcher assistants.

“Another advantage of the portion cutter is the fact that it provides the operator with an overview. On the screen, the operator selects the programme, specifying type of meat, weight and number of portions. It is easy, making it quick to start-up the task as well as change the type of product. It is a flexible machine that is excellent for our many smaller series and numerous product changes.”

The two permanent operators on the cutting line also took part in dedicing which portioncutter to  purchase. The new machine has an additional screen display, so that the operator at the end of the belt can also keep an eye on the cutting process.

“We tried a few other brands before we chose the Scanvaegt Systems solution – and I’m sure that we ended up with the best solution and support,” says Morten.

The Portio 3/300 portioncutter from the Belgian manufacturer Marelec features three cameras and a 300-mm-wide belt. The cameras measure the geometric shape of the meat in a split second and calculate precise cutting. The machine has a large programme capacity, which was also one of Cater Food’s requirements, since they use more than 100 different cutting programmes.

The machine has 3 cameras - 1 for top-view and 2 for side-view - each with its own laser line. The product is 3D-scanned for length, width and height. Then, along with the scanning, the machine uses the programme setup to calculate the cutting pattern, and cuts the portions configured in the cutting programme. This provides precise cutting of the product with a fixed weight or fixed length.

Leave us a message

Marelec Portio 3-300 is suited for extra large meat primals, being equipped with a belt of 300 mm wide, instead of the 254 mm wide belt on the "regula ...

The Marelec Portio 1 and 3 is suited for fresh products such as chicken, fish and meat. Following the product type, different product fixation systems ... 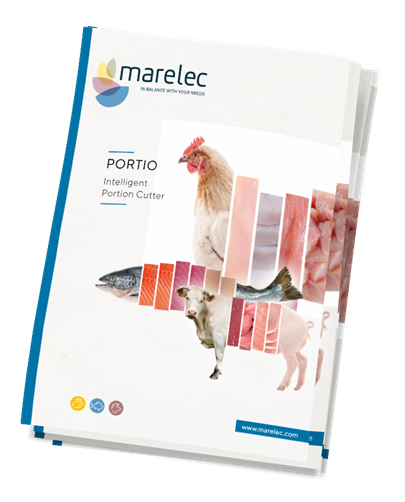